Fly fishing stuff you have to have

Just as the chill of winter begins to enter our bones, so does the almost Ahab like itch to land a winter steelhead. Why not learn how to do it from the best and go back to class with one of our steelhead spey schools? Mark Bachmann and crew will personally work with you on your casting providing pointers, improvements, or a full lesson from the basics the first day, and then a full guided float down the sandy the next day. Everyone can benefit from a bit of instruction. If your looking to improve your spey casting and overall understanding of what it takes to get a winter steelhead to hand then look no further than the FFS steelhead spey schools. Additonal information and dates can be viewed here: http://www.flyfishusa.com/adventure-trips/winter-steelhead-schools/winter-steelhead-schools-2015-2016.htm

Here is a video of Hawkeye and Mark doing some casting instruction during a school from years past.

Posted by flyfishusa at 1:32 PM No comments:

The good news is that it is raining hard, and as this is being written the Sandy river is at around 2,500 cfs, and the lower Clackamas is around 6,000 cfs. Currently both rivers are off-color and full of leaves, etc. But in a couple of days both rivers will clear and there will be new, bright Cohos, Fall Chinooks and Steelhead. Be ready with your Skagit heads and M.O.W. Tips. Winter is coming.
Posted by flyfishusa at 9:21 AM No comments:

Spey casting requires a lot of circular motion which tends to twist line. On many spey setups with mono filament shooting line after fishing through a run or two your line has so many twists in it that it ends up tangling on itself going out the guides just about every cast. This makes casting an absolute nightmare. To combat this the anti revolution spey swivel was developed here in shop and then adopted by Rio. The anti revolution spey swivel will keep your lines untwisted and allow for smooth easy casts. We can always improve our casting but we don't need our equipment working against us. 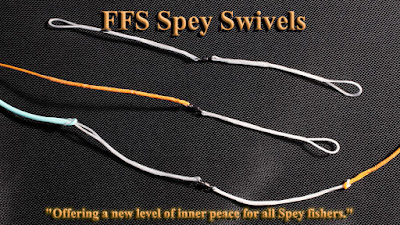 Posted by flyfishusa at 2:20 PM No comments:

The Waterworks  Lamson has just recently unveiled a new and upgraded version of their classic Guru reel. Because of this we are phasing out the Gurus for the Guru 2 and we currently have all of our Guru Reels and spools on sale for 40% off and the reels come with a free Cortland 444 series line of your choosing. The Guru is a steal at 40%, with a fully sealed conical drag, and a large arbor spool to make sure your line pulls out slow and steady, and reels up quick. Best of all it's made right here in the USA. It's first come first serve so don't sleep on this hot deal! 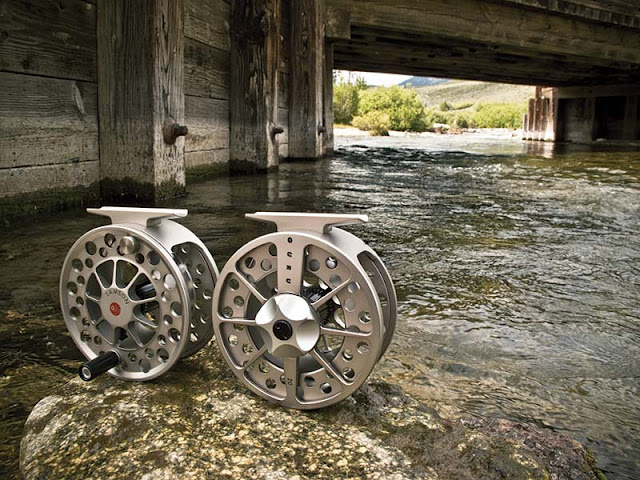 Posted by flyfishusa at 1:45 PM No comments:

As the temperature cools  down at the beginning of fall, the trout fishing heats up on many Northwest rivers. The chief catalyst behind this late season feeding goes by many names. The giant orange sedge, Fall Caddis, Giant Caddis, the most recognized being the October Caddis. Many regard this hatch very highly as the sheer size of these Caddis drive trout into a feeding frenzy similar a salmon fly, or Hexagenia.

The larvae of the October Caddis are stream dwellers that construct cases out of loose sand, gravel, and other organic streambed material. As they outgrow their cases they willdiscard them and build a new one. As the larvae reaches maturity it will seal its case and pupate. When the pupae emerge typically they will crawl or swim into shallow water near the bank or the bank itself for emergence, but a few of the pupae also will emerge midstream. The pupal shuck enveloping the Caddis pupa is air filled and when exposed to the decreased outside pressure of air bursts, allowing the adult insect to crawl out of the shuck. Emergence is typically a late afternoon and evening affair.

Once emerged and in their final adult form the Caddis are generally 20-30 mm long. The fat bodies of winged adults are in colors that range from light tanish orange to yellowish orange to bright orange to burnt orange. Wings are usually gray but there are also brown tones. There are apparently a number of different sub-species in what is commonly called October Caddis.  Most belong to the family Dicosmoecus and they range from California to Alaska. Egg laying or oviposting occurs in the evening. Large females will flit across the surface briefly making contact every few seconds to deposit her eggs.

These provide some of the last productive big bug dry fly fishing before most rivers close for the season or become too cold for any real surface activity. For those anglers who view nymphing as simply not an option, It is their last real chance to fish a big fly to big trout before the stonefly hatches of the following spring.

Posted by flyfishusa at 3:10 PM No comments:

DUE TO PUBLIC OUTRAGE, THEY FINALLY THREW IN THE TOWEL. REGULATIONS WILL STAY THE SAME AS PREVIOUS YEARS:


2016 Lower Deschutes Rainbow Trout proposal:
Mouth to Pelton Reregulating Dam:
Open all year.
2 trout per day, 10 inch minimum – 13 inch maximum length.
Artificial flies and lures, except bait may be used form Sherars Falls downstream to upper trestle, (about 3 miles)
No angling from a floating device.
AS IN THE WORDS OF ONE OF OUR BETTER EDUCATED CLIENTS:

"For now, the patients appear to have returned to the asylum.   Good job getting the word out. "It was truly insane."


A Statement of Political Position:

Dear Deschutes River Allies,
Unfortunately, the rumor is true. A proposal has been made to provide harvest options for larger trout on the lower 100-miles of the Deschutes River. The slot-limit (2-trout between 10”-13”), which has been in place since 1979 is proposed to be replaced with a 2-trout limit ) minimum size of 8”). I believe the slot-limit has provided the finest public fishery in Oregon and should be retained.
As of this writing, there is nothing about this proposal on the ODFW web site.
I had to search the ODFW Commission site to find this proposal (which I understand has also been removed). This smacks of a cover-up.
The lower Deschutes is one of the few fisheries that is managed to sustain itself indefinitely. And it supports tremendous fishing pressure, which pours cubic bucks into the communities around it.

Depleting the numbers of larger trout in this proud fishery can benefit no one.
I seriously believe that one of the reasons why Oregon’s State Fishery agency is always broke, is that it sells our resources too cheap.
We don’t need more harvest to make money. We need better fisheries to bring people from other states. The Deschutes River is the best sports fishery money mill we have.
ODFW’s mandate is to protect wild fish and to provide fishing opportunity. The problem is that ODFW Staff has interpreted the word opportunity to mean harvest. They seem to never realize that once a fish is harvested, the opportunity is gone. The slot-limit bridges this gap. The Commission might consider that they may already be doing the best job that can be done here. But, if they need easier rules for dummies to understand, make it strictly catch and release.
The meeting where the decision will be made is on September 4 in of all places Seaside, Oregon (on Labor Day week). The page that just went missing also states that no one will be allowed to testify unless they register 24-hours in advance.
I think that this lack of disclosure and the decisions being made in Sea Side is a plan to railroad these proposed changes away from the ease of public participation.
It is an old Bureaucratic trick to push through rules that the majority of their constituents would not agree with.
Doubtful that this bunch of Staff and Commissioners would have the fortitude to hold this same meeting in Maupin, Madras, Bend, Portland, or Welches.
As a matter of fact, I think that these cats have already made the decision.
All that is left, is the ratification, at a public meeting.
However, I am also a believer that democracy works as long as the citizens are willing to make their government govern by the will of the people.
Whatever the road blocks, we simply have to overcome them, and be a government of the people, by the people, for the people.
We can’t let these perpetrators steel all the hard work that has been put into the Deschutes fishery.

If the proposed regulation is allowed to go through, they’ve got it for a year, by that time they will probably do ten year’s-worth of damage for someone to repair.
And who but the professionals to better do the repair?
I can feel some bastard writing an order for funding, as I am writing this.
My suspicions may be a little intense, but I feel they are well thought out.
The decision to remove the slot-limit is a bad move biologically, and it is even worse since it has been done with a limited amount of public disclosure (which may be illegal as well).
This whole approach is wrong for the Deschutes, which is beyond a doubt the best fishery in Oregon. And the best part of the slot-limit is it was done by the will of the people, and by nearly unanimous consent of those people (I know, because I was involved).

I just talked to an ODFW insider, and that person basically told me that some of the staff is strongly opposed to this regulation change, but they were told to shut up in fear of retaliation.
I think it is imperative that we get mobilized to meet these issues head on.
In this case our government has apparently run totally amuck, and we must initiate a public investigation.
Ad your thoughts and pass this on to your own circle of power.
Thank you for your support in this matter.
Fish long & prosper,
Mark Bachmann
CEO
The Fly Fishing Shop, Inc.
Phone: 1-800-266-3971
Cell: 503-781-6468
mark@flyfishusa.com
www.flyfishusa.com
Posted by flyfishusa at 1:39 PM No comments: